COVID19 may be front and centre of media coverage and public discourse but let’s not forget that other diseases, illnesses and unfortunate realities like accidents are still happening. With this, blood reserves need to be boosted in the United Kingdom of Great Britain (UK) and beyond. In fact, the UK has a reported deficit of 137 000 blood donors.

At a time when saving lives is the highest priority for governments and people around the world, one would think that all avenues possible are being pursued. Sadly that is not the case as outdated laws (that seem to be allergic to logic) still prevent gay and bisexual men from donating blood unless they have abstained from sexual intercourse for three months. Case in point, blood donated by monogamous and married gay couples are among varying amounts of blood being discarded annually even if it is safe. 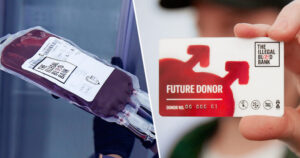 UNILAD and “Freedom to Donate“ have been campaigning for the UK Government to remove the three-month deferral period and institute a new individualised risk assessment that will assess donors sexual behaviour instead of their sexual orientation. With this, they have also established an “illegal” blood bank that follows stringent measures to ensure that all donated blood is safe but not accrued through discriminatory measures. Ultimately, the core objective of governance and blood donation, in totality, is to save lives, not to diminish them. See UNILADs campaign…

all images courtesy of UNILAD

This billboard sucks... but in a good way.

Good to be on stage at such an inspiring event!
#Goodvertising #Change #Action