Turkey is a country that’s forecasted to be most likely to be “water poor” in the future. Yet it is reported that people are wasting the resource “like there is no tomorrow” because they harbour the misconception that water is infinite.

Three years ago, Finish began a campaign related to water preservation. Currently, the campaign aims to make water a priority on everybody’s agenda. Water, it appears, is the most undervalued resource. Currencies, stocks and oil cannot compare to the value of water. And yet, there hasn’t been an attempt to demonstrate water’s true value.

With the help of well-respected Turkish Industrial Development Bank (TSKB), a water index demonstrating the value of water has been created. Under this index, a regularly computed formula captures amounts of water in reserves, water dedicated for industrial, agricultural and domestic consumption. The value of the index is between 70 – 130. Below 70 is “water poor” but anything above 100, is plenty. Just looking at the index makes it possible to determine how much usable water we have at our disposal.

The index reached a whopping 25 million people monthly. Following its launch, the conversation on water scarcity has increased by 121%. And among the people who have seen “Finish Water Index”, water consumption has decreased by 9%.

Goodvertising Verdict: A smart initiative that should be applauded for its intelligent integration into existing and widely consulted platforms and ultimate achievement of tangible impact. 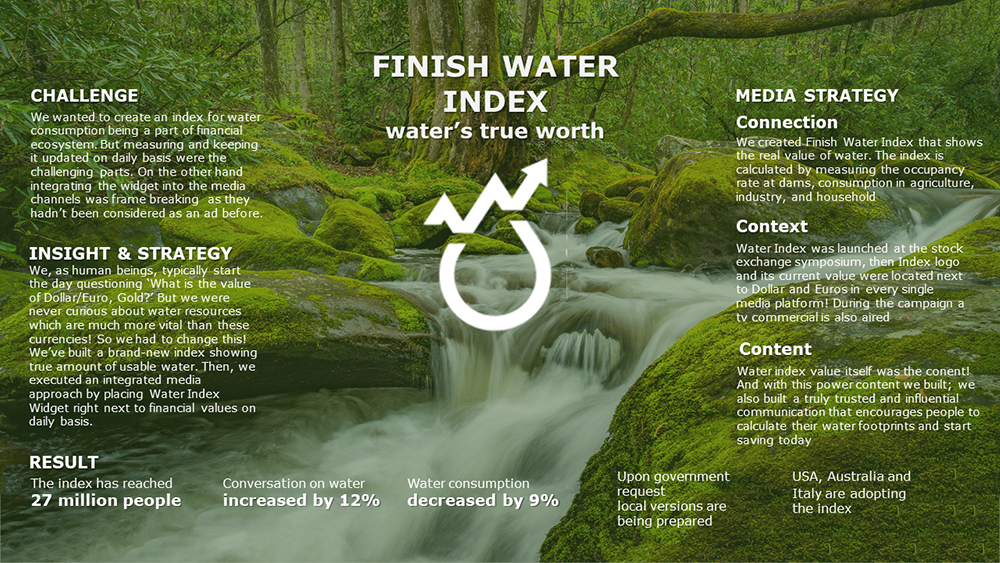 This billboard sucks... but in a good way.

Good to be on stage at such an inspiring event!
#Goodvertising #Change #Action